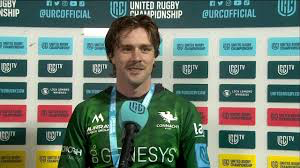 Connacht Rugby are thrilled to announce Irish international Mack Hansen has committed his long-term future to the club by signing a new contract until 2025.

Hansen had 12 months remaining on his existing contract but has now agreed to extend his time at the club by at least a further two years beyond his current deal.

The back three player has enjoyed a stunning first season at the club, scoring 6 tries in 14 matches since arriving from the Brumbies. His performances earned him a first call-up to the Ireland squad for the November internationals, and he then became a mainstay in matchday 23 for the Guinness Six Nations, starting in four of Ireland’s five games and scoring a famous try against France in Paris.

At this week’s Connacht Rugby Awards, Hansen has been nominated for both the Players’ Player and Fans’ Player of the Year Awards.

Mack Hansen says the next three seasons will be an exciting time for the club:

“Committing my future at Connacht was a no-brainer. Ever since I arrived in Ireland I cannot speak highly enough of the staff and my teammates who have made me feel right at home. Personally I’m pleased with how my first season has gone and now I want to do everything I can to help the club achieve success for the next three seasons.

The possibility of training and playing in Connacht Rugby’s new Stadium and High Performance Centre was also a major attraction for me, so I can’t wait to see what the future holds for me and for Connacht.”

“Mack has made an immeasurable impact on the club since his arrival. He’s a popular character with the players, staff and supporters and it’s been really pleasing to see him take to rugby in Ireland like a duck to water. For him to commit the next three years of his career to Connacht when he’ll only get better is a really strong show of faith in where we’re going as a club on and off the field, and I look forward to seeing Mack continue to develop and grow as a player during that time too.”