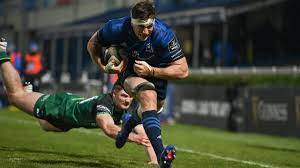 Leinster Rugby will take a five-point lead into the second leg of their Round of 16 Heineken Champions Cup tie with Connacht Rugby at Aviva Stadium.

Leo Cullen’s men had to absorb an early try and a yellow card to Jamison Gibson-Park on their way to posting three tries, two from James Lowe and one from Hugo Keenan, at The Sportsground in the first of the two-match tie.

Connacht had first use of the wind blowing towards Galway bay and bursts from Tom Farrell, Bundee Aki and Farrell again brought the crowd into the game.

A long-limbed block by Leva Fifita on Lowe kept Leinster pinned down and picture-perfect passing along the three-quarters enabled John Porch’s line to unhinge Leinster for the opening try in the third minute.

Ireland wing Mack Hansen was causing problems on the right and Jimmy O’Brien’s intervention shut down another dangerous move on the left soon after.

The indiscipline of Dave Heffernan at the ruck allowed Johnny Sexton to kick to touch, Dan Sheehan steaming away from the safety of the maul where Aki was waiting to stoop to conquer.

A diagonal counter from O’Brien and a long ball forward from Lowe backed up by another O’Brien kick meant a healthy gain of ground, Sexton slotting a penalty from a ruck infringement for 5-3 in the 19th minute.

The skills of Keenan, angling out and passing back inside, gave Lowe the hole to stay ahead of O’Halloran. Sexton converted for a 10-5 lead in the 24th minute.

The continuity of Leinster kept the questions coming, Keenan arriving on a short line to split the defence and returning the pass he took from Lowe to send the wing home for his second try in the 26th minute.

Hansen was a handful, chipping and gathering to give O’Halloran an opening van der Flier closed in the blink of an eye.

A challenge by Ross Molony on Fifita at the lineout was deemed illegal, Carty claiming a penalty for 15-8 in the 33rd minute.

Luke McGrath smartly picked the pocket of Farrell to set up an attack which Sexton turned into three points.

The devilish skills of Hansen, snaking across the pitch, put O’Halloran on the ball. Cian Healy was penalised with the clock in the red for Carty to make it 18-11 at the break.

Connacht came charging out of the blocks, moving the ball into the hands of Porch and Hansen for Carty to tumble a kick inside the 22.

Cian Prendergast provided the momentum, Conor Oliver the break and Aki the support to hand Carty a simple penalty in the 46th minute.

The commitment of O’Brien led to a block on Farrell and the battering of Carty back over his own line for a five-metre scrum.

A power surge for penalty advantage made for a free play, McGrath’s knock-on causing the overturn of what looked like Lowe’s hat-trick try in the left corner.

It was then the scrum-half saw yellow for a shoulder to the head of Kieran Marmion.

A superb kick to touch from Carty provided the launchpad for two lineouts and a series of drives which ended with Fifita burrowing over for the out-half’s conversion to make it 23-21 in the 62nd minute.

A turnover from Oisin Dowling meant Hansen triggered a counter up the right. Porch’s pace twice scaring Leinster and Conor Fitzgerald looking likely to score before Lowe tracked back to make the tackle and Dowling lost control in going for the line.

Van der Flier ripped the ball away and fended three tackles for Leinster to bound forward.

The pack took it from there, moving the maul for Doris to go close and James Tracy closer still.

A final attack allowed Ross Byrne to add a further three points from the tee in the 77th minute which would prove to be the final say, at least for the first leg.