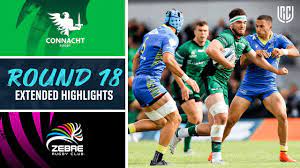 Connacht wrapped up their United Rugby Championship campaign with a 22-20 win over Zebre at the Sportsground.

It was an emotional day as the fans said goodbye to Ultan Dillane, Eoghan Masterson, Sammy Arnold and Abraham Papali’i who will all depart the province but the team delivered the bonus point win to mark the occasion in style.

The hosts scored four tries in total, through Kieran Marmion, Niall Murray, Masterson on his Connacht swansong and John Porch in a performance showcasing some excellent attacking play.

The away team, meanwhile, scored three tries of their own and added a penalty, but it was the home team who held on for the deserved win.

With the Sportsground bathed in balmy weather, both teams were content to play an open brand of rugby in the opening exchanges and it was Zebre who drew first blood.

Strong breakdown work won the visitors a penalty and Carlo Canna made no mistake in slotting the kick and the Italian team worked themselves into a 3-0 lead with barely five minutes gone.

Connacht, however, worked their way back into the game immediately in what was proving a highly entertaining opening seven minutes of the contest.

After a clever line-out routine, Tom Daly carried hard and punctured through the Zebre defence. The centre was stopped eventually, but the hosts had an overload wide on the left and the ball was moved to Marmion who dove in the for the score to move Connacht 5-3 ahead.

The home team were totally in the ascendancy after their try – with Daly and Cian Prendergast central to their ball carrying and playmaking efforts – and they made it two tries not long after their first. A beautiful sweeping move from right to left saw Prendergast acrobatically dodge a would-be tackle with a step before delivering an even better offload to Murray to touch down in the left corner and take the score to 10-3.

The Connacht broken play attack looked superb, but so, too, did set-piece attacks and it showed just after the midway point of the first half. In his final appearance at the Sportsground, a well–constructed line–out maul saw Masterson touch down for a try manufactured by the pack. Carty slotted the extras and the hosts lead 17-3.

Zebre, to their credit, didn’t baulk and they had the game’s next try, on the stroke of halftime. Full-back Lorenzo Pani was the benefactor of a quick move and he touched down in the corner. The conversion was wide and the teams went into the interval with Connacht 17-8 in the lead.

Connacht wrestled momentum back at the beginning of the second half and their pressure told with the second period eight minutes old. The hosts spread the ball wide quickly first through Carty and then Oran McNulty, with the full-back feeding Porch, whose step and pace took him away from the cover defence and over the line for a try of both collective and individual brilliance. The home team were deserving of both their bonus point and their 22-8 lead.

With both teams emptying their benches – Dillane, Papali’i and Arnold came on for their Connacht swang songs – the game became fractious and it was the visitors who were the team to snap out of the lull first and they went over for an unconverted try through their replacement tight-head Matteo Nocera muscled over from close range to see the home team’s score reduced to 22-13 with ten minutes remaining.

With their tails up, the Italians went in search of more scores and they registered their third try with the game approaching the 80th-minute mark. Centre Enrico Lucchin showed great pace and strength to breakthrough for an individual try that Cana converted to cut the host’s lead to 22-20 with just over a minute left.

The hosts, however, showed determination to pin Zebre in their own half and close off the game to take the win at 22-20.