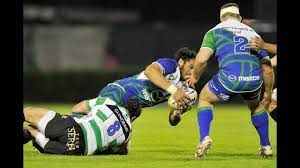 Tietie Tuimauga rescued a vital win for Connacht after they looked to have thrown away victory in a 21-17 triumph at Benetton.

However, Tuimauga forced his way over under the posts in the 75th minute for a win that preserves Connacht’s play-off hopes.

Andy Friend’s men came into the weekend trailing the top eight by nine points and having played a game more than all of their rivals for a place in the end-of-season knock-out.

They got off to a dream start when Cian Prendergast touched down in the first minute and Niall Murray also went over before half-time.

However, Edoardo Padovani hauled Benetton back into the contest early in the second period and Toa Halafihi put the home side in front for the first time before Tuimauga settled matters in Connacht’s favour, with Jack Carty converting all three of the visitors’ tries.

Connacht had the lead after only 52 seconds, with Prendergast finding a gap and then evading Dewaldt Duvenage’s attempted tackle with a neat step to go over next to the posts, affording Carty a straightforward kick.

Giacomo Da Re got Benetton off the mark with a ninth-minute penalty but Murray then crossed from close range and Carty added the extras.

The home side grew into the match, although a couple of kicks to the corner drew no reward and they reached half-time having made no further inroads.

Benetton did have their first try nine minutes into the second period, however.

A driving maul on the left wing came to a standstill but the hosts showed great hands to spread the ball wide to the right, where Padovani had the time and space to apply the finish.

Da Re reduced the arrears to four points from the tee and Benetton turned up the heat as the penalty count increased, with Connacht eventually losing Prendergast to the sin bin shortly after the hour mark.

Benetton took the lead for the first time after 69 minutes when Halafihi picked the ball up at the back of a scrum and stretched for the line, with Da Re’s kick making it 17-14.

Manuel Zuliani was yellow-carded as Benetton desperately defended their narrow lead five minutes from time and Connacht took advantage, with Tuimauga muscling over and Carty completing the scoring.

Player of the match
The individual honour may serve as a small consolation for Halafihi, who looked to have swung the match in Benetton’s favour heading into the last 10 minutes.

He also beat more defenders (6) than any other player in a Benetton jersey but was ultimately made to settle for a losing bonus point after Tuimauga’s late touchdown.

Play of the match
Prendergast’s run to open the scoring in the opening minute was a strong contender, but the quick passing that led to Benetton’s first probably just edges it.

From the moment the ball emerged from the back of a stalled maul the handling was perfect and released Padovani into space on the right wing, giving him an easy finish.