Ireland made history with their first ever win over the All Blacks on New Zealand soil, bringing the Test series level with a 23-12 victory that reverberated around Forsyth Barr Stadium and far beyond. Three Connacht players go time on the pitch Mack Hansen, Bundee Aki and Finlay Bealham.

Taking advantage of the hosts’ indiscipline, Andrew Porterpiled over for a try in each half and captain Jonathan Sexton’s composed kicking delivered the other 13 points. 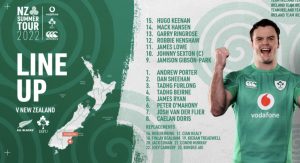 A late Will Jordan try, preceded by a series of surges at the line, was New Zealand’s only second half score as Ireland’s robust defence helped them to close out a stirring 23-12 victory.