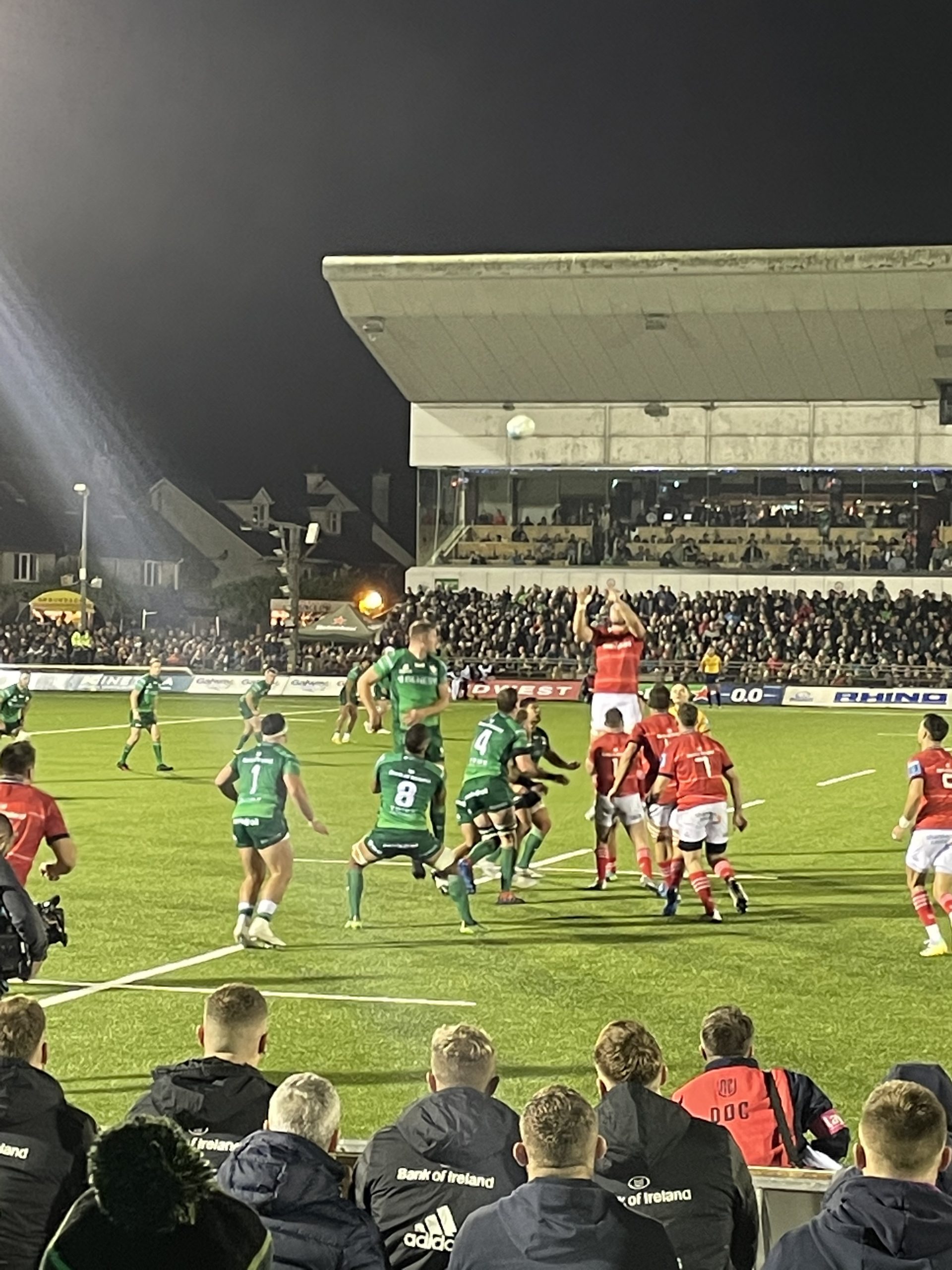 Connacht got their first win of the season in front of a sold-out Sportsgrounds on Friday night by defeating provincial rivals Munster on a score line of 20-11.

Connacht started the game well and really looked to impose themselves physically with hard running with ball in hand. Big carries gained plenty of ground and there was an intensity we just hadn’t seen this season so far. Some big scrums from Connacht led to an attacking platform in Munster’s 22. A penalty advantage was awarded, Jack Carty sensed the opportunity by flinging a pass to star player Mack Hansen who broke one tackle to touch down for the opening score of the game.

In what would lead to a poor night from Jack Carty from the tee, he missed the following conversion. Jack then missed another penalty by hitting the post for the second time and Connacht fans were left wondering if those five points would come back to haunt them.

Things would get worse as Munster finally got some sustained pressure in Connacht’s half and after some good forward play by the men in red, they moved the ball wide and Patrick Campbell placed the ball down with great athleticism to get the five points. Healy missed the conversion to leave the game 5-5.

The remainder of the first half became a sloppy affair, some questionable refereeing decisions led to a lot of frustration from both sets of fans and a lot of infringements called. The game became very stop start meaning neither team could get into a rhythm. Munster added 3 points right before half-time by the boot of Ben Healy leaving the visitors 5-8 up at the break.

The opening 10 minutes of the second half were all Munster. They were constantly knocking at the door, but some stout Connacht defence led to just 3 points being scored from a penalty. Like I predicted, Munster really tried to make this a drab affair, slowing everything down and taking as much time off the clock as possible, and for a long time it looked like it was going to work.

However, Connacht finally got reward when Finlay Bealham barrelled over in the 53rd minute of the game. A huge maul off a line-out to the back caught Munster unaware and Connacht instantly made ground resulting in the Irish prop scoring five points. Carty missed the conversion leaving Connacht still one point behind Munster.

A huge momentum builder was Connacht’s defensive effort straight after scoring that try. Munster were camped in Connacht’s 22 and for phase after phase carried with big ball carriers like Tadgh Beirne, Peter O’Mahony and Gavin Coombes. Tried as they might, Munster couldn’t make a breakthrough and it eventually led to a turnover for Connacht to relieve the pressure.

That passage really spurred Connacht on. They came straight back up the pitch and won a penalty which was slotted by then appointed kicker Conor Fitzgerald. Connacht had regained the lead by two points, 13-11.

Connacht fans knew that they needed another try before they could fully believe, and to their relief that try came in the last few minutes of the game when another fantastic maul left Connacht on Munster’s try line. After an unsuccessful pick and go attempt, Paul Boyle stepped up to drive low under Gavin Coombes and score the try that sealed the game. Conor Fitzgerald kicked the conversion to put the game out of reach for Munster.

Really loved the physicality and intensity Connacht brought to that game. A mix of home fans and excitement upped the tempo and some of the hits that went in were huge to see in person. Even more impressive when you think that the Connacht pack would not be known for huge hitters like the Munster pack.

The scrum and line-out/maul has been a huge improvement. Credit must go to Dewald Senekal for his work here. Connacht’s set piece was a liability two seasons ago. The maul defence especially was a weak point. Now it has become an asset. When I saw the team sheets for this game, I was worried about scrums and lineouts, Munster are known for having a fantastic set piece and that was their strongest pack that they can name. Connacht bullied them at times and that gives me huge hope going forward.

Some of the Individual performances were huge. Finlay showed us why he is an international prop by dominating the scrum. Jack Carty brought a confidence to the team and controlled it well. Didn’t have his kicking boots with him but that can happen. John Porch was fantastic and nearly broke Joey Carberry in half with a huge tackle. Gavin Thornbury reminded us why he was in contention for an Irish call up last year with a huge performance.

Connacht still lacked a sharpness at times, especially in that first half. Connacht had all the ball and were by far the better team but still went in at half time three points down. Also, decision making still at times is baffling. Late in the second half Connacht had a penalty five metres out. The scrum and maul were working so well all day and they decided to tap and go and turn the ball over. Silly decisions.

Munster in general were a negative. They tried to revert to the old Munster last night and tried to bully Connacht and it didn’t work. If they are taking this transition seriously, they can’t play like they did last night. Starting Conor Murray should be a thing of the past, Craig Casey would have caused way more problems for Connacht last night. Joey Carberry was anonymous for the entire game. The only big name who brought it last night was Tadgh Beirne who was his usual brilliant self. It’s an interesting season for Munster and I still believe if they stick to the transition plan, they can get back to their best, but some hard decisions are going to have to be made.