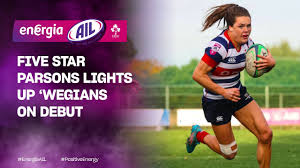 Ireland star Beibhinn Parsons had an Energia All-Ireland League debut to remember with Blackrock College, running in five tries in their 36-19 win over previously unbeaten Galwegians.

Parsons, who started on the left wing, was a class apart and showed her Sevens-honed speed to score a first half hat-trick. Blackrock led 19-14 at the turnaround.

Mollie Walsh and Dearbhla Canty both touched for Galwegians in addition to captain Nicole Fowley’s place-kicks. Yet, Canty’s 75th-minute effort was mere consolation as the prolific Parsons had ‘Rock out of reach.

Lisa Mullen’s kick through was gobbled up by Parsons for her fourth try in the 42nd minute, and fellow international Enya Breen crossed on the hour mark courtesy of Maeve Liston’s pop pass.

With 15 minutes remaining, Ireland Sevens scrum half Emily Lane used a turnover to charge downfield and link with the supporting Parsons for her fifth of the evening.

Suttonians had a luckless outing, Lena Kibler’s early levelling try showing their ability but they were derailed by a couple of injuries, most notably scrum half Emily McKeown who was taken to hospital, and two costly yellow cards.

Ballincollig and Wicklow finished all-square at Tanner Park, the 10-all draw seeing Heather Kennedy and Michelle O’Driscoll cross for ‘Collig. Wicklow had unconverted efforts from Sarah Gleeson and Caoimhe Molloy.

Old Belvedere remain top of the table after their fourth straight victory. They beat Cooke 65-0 in Belfast, racking up 11 tries with braces from Laura Carty and Aoife Dalton, who made her Ireland debut against Japan in August.