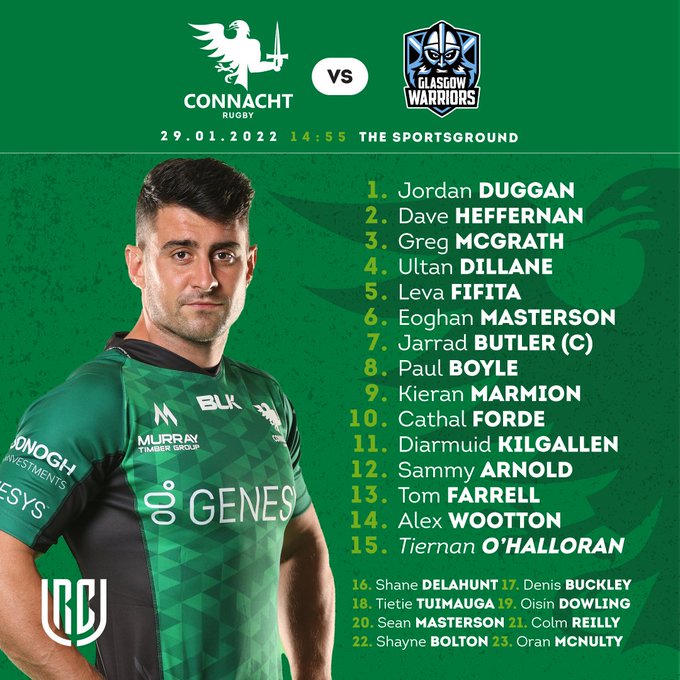 The teams and TV details for Saturday’s Round 11 fixtures of the United Rugby Championship have been named with all details of match officials.

Emirates Lions Head Coach Ivan van Rooyen said: “I feel for Pieter (Jansen van Vuren). He worked so hard to come back from his knee injury he suffered on tour. We wish him a speedy recovery from this latest setback. The opportunity now awaits Ruan (Venter), who’s had a fantastic past few months, including a SA Rugby U20 Cup winner’s medal. He could possibly get his chance on Saturday. Providing opportunities to young players is a common theme for us here at the franchise and it’s something we pride ourselves in. In the same breath, the entire squad buys into what we are trying to achieve in the VURC , so everyone plays a key part towards that goal.”

Vodacom Bulls Director of Rugby Jake White said: “The Emirates Lions showed a good fight in their match against the Cell C Sharks last weekend. We have no doubts that they will want to build from that and go one better in search of a win in their own back yard this weekend. It is always a tough, physical battle against the Emirates Lions. They are a well-coached side that will throw everything at us. We are looking forward to another exciting Vodacom URC encounter.”

Connacht Rugby Head Coach Andy Friend said: “Tiernan’s 200th cap is a huge achievement for him. To play 200 times for one club is a testament to his loyalty to Connacht, his dedication to the game, and his ability as a footballer. The fact that he’s reached the milestone for his home province, having come through the ranks at Connemara RFC and Garbally College, only adds to the achievement. Tomorrow’s game is a really important one in the context of the URC standings. We don’t have many home games left so it’s crucial we pick up as many points as possible in these fixtures. The results of the last two weeks were disappointing so it’s up to all of us to ensure we do enough for 80 minutes to get the win.”

Glasgow Warriors Head Coach Danny Wilson said: “We’re looking forward to resuming our league campaign tomorrow afternoon We know the conditions we could face at The Sportsground and how Connacht like to play, and we’re ready for the challenge they present. Connacht are a side who have played well recently and are very consistent at home. We welcome back a couple of guys coming back to us at the end of the week from Scotland camp. The boys have trained well and we look forward to the challenge.”

Cell C Sharks Head Coach Sean Everitt said: “The positives from last week were the opportunities we created, and I was happy with the quick attack and the way we were able to move the ball and the continuity we got from that; the offloads in the build-up to some of the tries was also really pleasing, and we also managed the game well at times and that was why we came out on top.”

DHL Stormers Head Coach John Dobson said: “While it was disappointing to lose Salmaan and Evan this week, we are looking forward to seeing what all of the players coming in this week can add. Evan picked up a minor knock on his rib, so we are managing him conservatively, while also keen to see what Hacjivah can do at the back of the scrum. Angelo, Nama and Marcel have all performed well for DHL Western Province and will be looking to grab this opportunity”

Ospreys Head Coach Toby Booth said: “We are looking forward to challenging ourselves against the very best, as we always do, and the exciting thing is that we are back home and we have people coming in to watch the game. Having the fans back is massive, everybody likes watching live sport and players love performing in front of live audiences. In those difficult moments, a home crowd can make the difference. We need as much support as we can get to support our young players and to drive us over the line.”

Edinburgh Rugby Head Coach Mike Blair said: “It’s great to head into this game off the back of a really encouraging win against Brive, where we did a lot of positive things in both attack and defence, however as a group we know that Ospreys will be a far tougher challenge, especially away from home. The Ospreys squad is filled with both experienced internationalists and exciting up-and-coming talent, while they’ll be looking for a reaction following a couple of tough losses in Europe. There is lot of competition for places in the squad where guys are constantly putting their hand up in training, so we’re excited to make a few changes to the line-up. A number of players have been given their opportunity in what is another massive league fixture for us.”

Cardiff Rugby Director of Rugby Dai Young said: “The one thing that does focus the mind is playing against Leinster. It will be a real big challenge for us and something we’ve spoken about as a squad. We’re looking at our win percentages with internationals, which is a lot better than when they’re not available. There’s a big onus over the next month to get the results because we’re only as strong as every performance. That’s true whether we’ve got internationals or not. It’s important to have the crowd back. That gives everyone the buzz and the excitement. When we have had crowds here this season they’ve been excellent and played a big part. Hopefully they’ll come out in their numbers and are nice and loud like they have been this season. We’ve got a part to play in that, doing the job on the field and giving them something to cheer about. That’s why we play rugby.”

URC TV is the official OTT player for the United Rugby Championship where fans can watch games live on phone, desktop or tablet and includes: